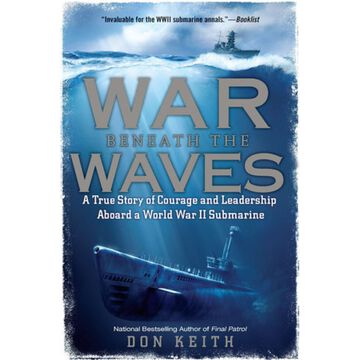 War Beneath the Waves: A True Story of Courage and Leadership Aboard a World War II Submarine by Don Keith

A gripping true account of submarine heroism, War Beneath the Waves is an inspiring tale of one young naval officer’s leadership and courage under fire under some of the most dangerous waters of World War II.

In November 1943, while on war patrol in enemy waters, the submarine U.S.S. Billfish was spotted by the Japanese, who launched a vicious depth charge attack. Explosions wracked the sub for twelve straight hours. With senior officers incapacitated, diving officer Charlie Rush boldly assumed command and led key members of the crew in a heroic effort to keep their vessel intact as they tried to escape. What followed is one of the most improbable and dramatic stories of the Pacific War.

Told in harrowing detail, War Beneath the Waves is a pulse-pounding story of a submarine crew’s valiant fight to save their boat - and one man’s astonishing bravery and coolness in the face of seemingly certain death.

Penguin Random House
Penguin Random House® is the international home to more than 300 editorially and creatively independent publishing imprints. Together, their mission is to foster a universal passion for reading by partnering with authors to help create stories and communicate ideas that inform, entertain and inspire, and to connect them with readers everywhere.