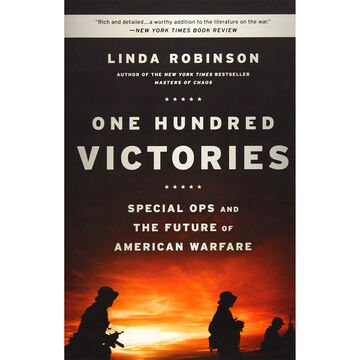 One Hundred Victories: Special Ops and the Future of American Warfare by Linda Robinson

One Hundred Victories is a portrait of how, after a decade of intensive combat operations, special operations forces have become the go-to force for US military endeavors worldwide.

Linda Robinson follows the evolution of special ops in Afghanistan, their longest deployment since Vietnam. She has lived in mud-walled compounds in the mountains and deserts of insurgent-dominated regions, and uses those experiences to show the gritty reality of the challenges the SOF face and the constant danger in which they operate. She witnessed special operators befriending villagers to help them secure their homes, and fight off insurgents in the most dangerous safe havens.

One Hundred Victories also includes the inside story of the dramatic November 2011 cross-border firefight with Pakistan, which sent the US commander into a fury and provoked an international crisis. It describes the murky world of armed factions operating along the world's longest disputed border, and the chaos and casualties that result when commanders with competing agendas cannot resolve their differences.