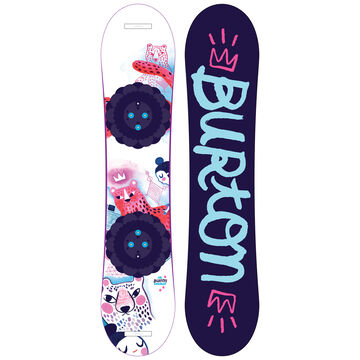 When you want to see her succeed, put her on the softest, most stable girl's beginner board in snowboarding! The Burton® Chicklet™ is the ticket for girls who want to start snowboarding and quickly learn the basics. What makes it so perfect is the beginner-friendly combo of a convex base with upturned edges and the softest flex possible, so that even the lightest weight riders can master turning and stopping.

The catch-free feeling continues with a flat profile from nose to tail that's extra stable for better balance and board control. Attach the Riglet accessory, sold separately, to the nose or tail of the 80-120cm sizes to tow her around and get her comfortable until she's ready to add bindings.

Burton
In the mid-60's, Jake Burton was one of the thousands of kids to start surfing on snow with Sherman Poppen's Snurfer™. It might have been only a department store toy, but it was also the earliest commercial form of the modern snowboard. Jake was hooked, and over the years he modified Poppen's Snurfer. Jake was convinced that surfing snow had potential to grow into something more. He bid the Manhattan business world goodbye and moved to Londonderry, Vermont to start shaping snowboards. The year was 1977, and Jake was about to launch the world's first snowboard factory. In its second year, Jake moved into a farm house in Manchester, Vermont - the facility that went on to produce such classic boards as the Backhill™ and Performer™.

In 1992, Burton® Snowboards moved from its Manchester location to its current location in Burlington, Vermont. The move was driven by the same motivation that took Jake from New York to Londonderry to Manchester: a commitment to making the world's best snowboarding equipment and apparel and growing the sport.

The same heart that beat years ago in a garage in Londonderry, Vermont still beats strong today within the ever-expanding walls of Burton offices around the globe. At Burton, two things matter more than anything else - riders and riding.