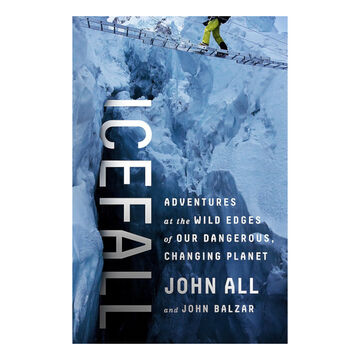 Icefall: Adventures at the Wild Edges of Our Dangerous, Changing Planet by John Balzar

In May 2014, the mountaineer and scientist John All fell into a crevasse near Everest and took a series of videos as he struggled to climb out 70 feet of ice and snow with fifteen broken bones - including 6 cracked vertebrae, internal bleeding, a severely dislocated shoulder, and his face covered in blood. The videos of him went viral and appeared in newscasts all over the world: CNN, BBC, Australia, Brazil, Israel, South Korea, Saudi Arabia, etc. and every website imaginable - from People Magazine to National Geographic. NPR called him "a badass for science."

Yet this story is only the latest of All's adventures. He's also won a footrace for his life with a wild hyena, stepped on a black mamba in the African bush, and scaled Everest - all in pursuit of his true passion: the future of adaptation to our world's changing climate.

Icefall is more than a fascinating adventure story - it is a report from the extremes, which hold new lessons about the impact of climate change. It is about the collapsing Andean glaciers, the hidden jungles in Honduras where native people have learned about surviving hurricanes, and the highest points on earth, where more scientific secrets lie. The result is a thrilling adventure memoir with profound lessons for how humans will adjust as our world continues to change beneath our feet.