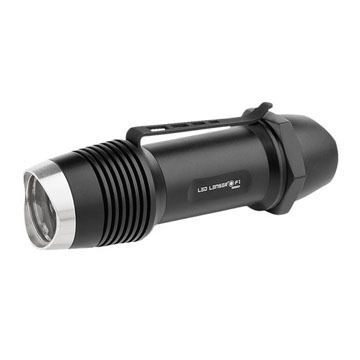 Get 400 lumens from one CR123 battery! The F1 reaches this record as the first one in its class. But that's just the beginning.

LED Lenser
In 1993, the bank refused to grant twin brothers Rainer and Harald Opolka a business loan and they had no real estate to offer as collateral - just fresh ideas and the prototype of the first LED Lenser® V8 flashlight. For the gentlemen at the bank who told them that the V8 was unsellable, that wasn't enough. So in 1994, with 1000 DM, a sketch book, toolbox and old Atari® computer, they struck out on their own and founded LED Lenser in their garage in Germany.

With all the passion and courage of two young, newly-minted entrepreneurs, they managed without the bank and to their own surprise ended up selling more than 200 million Euros' worth of LED flashlights in the first five years. The V8 became an international design classic and one of the the top-selling LED flashlights in the world.

Now as they like to say, "We are our own bank." As if to remind anyone of this who might happen by, a lone, tattered, pirate flag waves over their Solingen headquarters.

Hundreds of patents and design awards later, and LED Lenser is now a company of more than 1000 employees, three manufacturing bases and a range of some of the world's highest-quality LED flashlights. Today, just as in the beginning, they remain driven by light - the emission, channeling and powering of light.