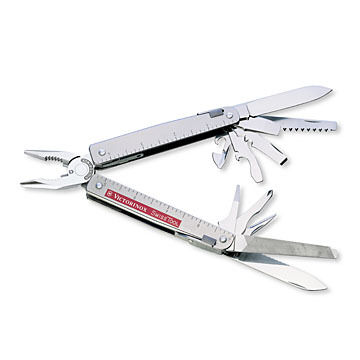 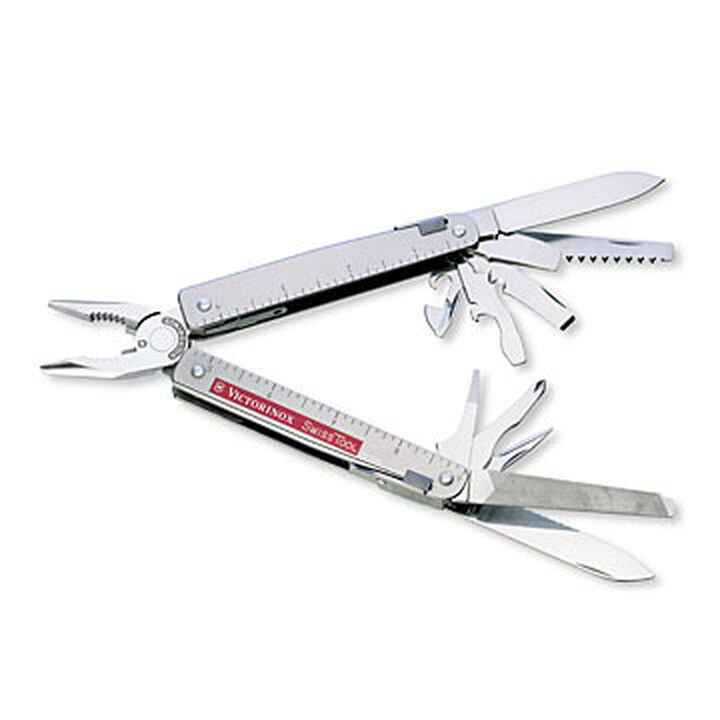 The ultimate tool at home or in the outdoors, the SwissTool is in a league of it's own.

This multi-tool includes a nylon belt pouch for easy service at your side. Individual springs hold other tools in place so you can access one tool at a time, and all implements can be opened from the outside of the handle without opening the pliers.
Tools:

Victorinox Swiss Army
In 1897 the Original Swiss Army Knife was created in the small village of Ibach, Switzerland. Since that time, Victorinox has become well-known in more than 100 countries for precision, quality, functionality and versatility.

This century old heritage has been extended to Swiss Army Watches, which reflect the ingenious design and outstanding durability Victorinox has come to stand for over the years. Uncompromising craftsmanship makes these watches worthy to carry the "cross and shield" emblem that symbolizes the legend of Victorinox and the Swiss Army Brand.

The Victorinox Swiss Army Knife is over 100 years old. This useful pocket Multi-Tool was legally registered on June 12, 1897. More than 34,000 of these pocket tools with the distinctive Swiss cross leave the factory in central Switzerland each day. 90% are for export and serve as ambassadors for Switzerland.

After an unparalleled success story around the world, the Victorinox Swiss Army Knife is even orbiting the Earth as part of the standard equipment of the Space Shuttle Crew. The knife has also been successfully proven on expeditions: in the arctic ice of the North Pole; on the highest peak on earth, Mount Everest; in the tropical rain forests of the Amazon, and elsewhere.

Time and again, it has been a life saver in situations of extreme danger and great need. The New York Museum of Modern Art and the State Museum for Applied Art in Munich have selected it for their collection of excellence in design, and, since Lyndon B. Johnson, U.S. presidents present guests with Victorinox pocket knives.