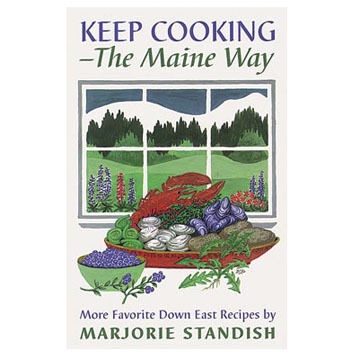 "Not everyone gets a chance to write a second cookbook," writes Marjorie Standish. "That's the reason I feel so grateful that this book came about." After the phenomenal success of her first book, Cooking Down East, it was inevitable that her readers clamored for a second collection of tried-and-true Maine recipes. Fortunately the longtime Maine Sunday Telegram columnist was glad to oblige, and another bestseller, Keep Cooking - the Maine way, was the result.

Readers of Mrs. Standish's newspaper column shared their favorite recipes generously, which gives this cookbook a pleasing variety and unpretentiousness. "Maine cooking is a way of life. It is evident as you use these recipes," the author writes in her Foreword. "You will find all kinds: they came from our family and they from yours. If you felt proud enough of your family recipes to share them in my column, then they have deep meaning for all of us. . . . It is like opening a treasure chest to share a recipe."

More About Down East Books