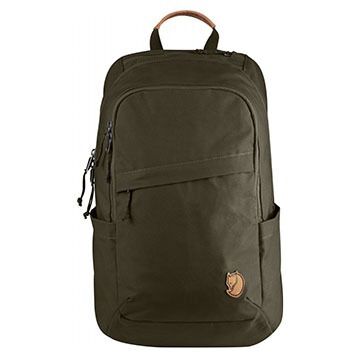 The Räven combines simple aesthetics with useful features, such as a padded laptop sleeve and a fleece lined pocket for storing your phone, sunglasses or keys. Large zippered compartments and inside mesh pockets provide numerous packing options.

Made from extremely durable G-1000® heavy-duty fabric (65% polyester, 35% cotton), this pack will carry your belongings for years of commuting and weekend outings.

Fjallraven
In the 1950's, 14 year-old Åke Nordin from Örnsköldsvik in Northern Sweden spent more time outdoors than indoors. After many long treks in the mountains, Åke decided the backpacks at the time were unsatisfactory and took matters into his own hands by building a wooden frame. This evenly distributed weight across his back so the pack did not end up uneven, pear-shaped, and uncomfortable. It also meant he could carry more weight with ease. Åkes innovation quickly caught on and in 1960 Fjällräven® became the first to commercially make and distribute framed backpacks.